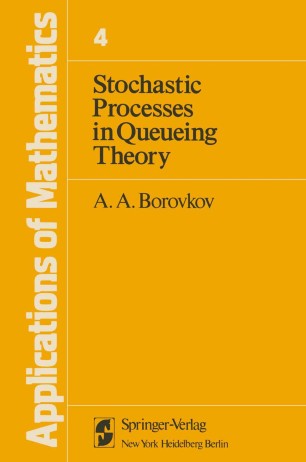 Part of the Applications of Mathematics book series (SMAP, volume 4)

The object of queueing theory (or the theory of mass service) is the investigation of stochastic processes of a special form which are called queueing (or service) processes in this book. Two approaches to the definition of these processes are possible depending on the direction of investigation. In accordance with this fact, the exposition of the subject can be broken up into two self-contained parts. The first of these forms the content of this monograph. . The definition of the queueing processes (systems) to be used here is dose to the traditional one and is connected with the introduction of so-called governing random sequences. We will introduce algorithms which describe the governing of a system with the aid of such sequences. Such a definition inevitably becomes rather qualitative since under these conditions a completely formal construction of a stochastic process uniquely describing the evolution of the system would require introduction of a complicated phase space not to mention the difficulties of giving the distribution of such a process on this phase space.