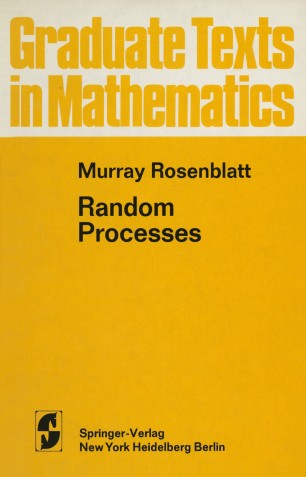 This text has as its object an introduction to elements of the theory of random processes. Strictly speaking, only a good background in the topics usually associated with a course in Advanced Calculus (see, for example, the text of Apostol [1]) and the elements of matrix algebra is required although additional background is always helpful. N onethe­ less a strong effort has been made to keep the required background on the level specified above. This means that a course based on this book would be appropriate for a beginning graduate student or an advanced undergraduate. Previous knowledge of probability theory is not required since the discussion starts with the basic notions of probability theory. Chapters II and III are concerned with discrete probability spaces and elements of the theory of Markov chains respectively. These two chapters thus deal with probability theory for finite or countable models. The object is to present some of the basic ideas and problems of the theory in a discrete context where difficulties of heavy technique and detailed measure theoretic discussions do not obscure the ideas and problems.