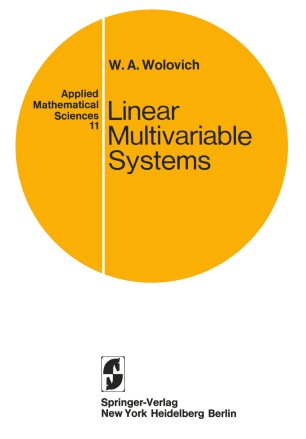 This text was developed over a three year period of time (1971- 1973) from a variety of notes and references used in the presentation of a senior/first year graduate level course in the Division of En­ gineering at Brown University titled Linear System Theory. The in­ tent of the course was not only to introduce students to the more modern, state-space approach to multivariable control system analysis and design, as opposed to the classical, frequency domain approach, but also to draw analogies between the two approaches whenever and wherever possible. It is therefore felt that the material presented will have broader appeal to practicing engineers than a text devoted exclusively to the state-space approach. It was assumed that students taking the course had also taken, as a prerequisite, an undergraduate course in classical control theory and also were familiar with certain standard linear algebraic notions as well as the theory of ordinary differential equations, although a substantial effort was expended to make the material as self-contained as possible. In particular, Chapter 2 is employed to familiarize the reader with a good deal of the mathematical material employed through­ out the remainder of the text. Chapters 3 through 5 were drawn, in part, from a number of contemporary state-space and matrix algebraic references, as well as some recent research of the author, especially those portions which deal with polynomial matrices and the differential operator approach.