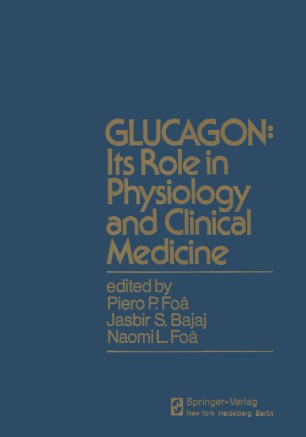 GLUCAGON: Its Role in Physiology and Clinical Medicine

The growing interest in glucagon. almost universal among diabetologists. made the decision to hold a satellite symposium immediately after the IX Congress of the International Diabetes Federation easy. indeed almost unavoidable. The climate. the beauty of its uniquely picturesque canals and houseboats. of its lakes and its mountains and above all. the friendliness of its people made the choice of Sri nagar equally easy. Problems of transportation and housing which appeared of Himalayan proportions from thousands of miles away were resolved with deceptive ease: as if the late autumn sun of New Delhi and Sri nagar had melted the snow that already covered many areas of the United States. For this. we thank the Executive Council and the Scientific Program Advisory Committee of the Congress. the Chairman and Co-Chairman of the local committee, Drs. Ali Mohammed Jan and S. N. Ahmed Shah; the Organizing Secretary, Dr. Syed Zahoor Ahmed; the joint Secretary, Dr. M. Y. Alvi; the Secretary of the Scientific Session. S. N. Dhar and the other committee members, Drs. G. Q. Allaqband, Wm. Riberio, Girja Dhar, J. A. Naqashbandi and Messrs. D. P. Zutshi, K. Amla and Ajit Singh. We are deeply grateful to His Excellency Sheikh Abdullah, Chief Minister of Jammu and Kashmir for his interest in the symposium and for the unforgettable hospitality offered in the name of his people. The suggestions, criticism and understanding of many colleagues helped us select topics and speakers for a representative rather than a comprehensive program.