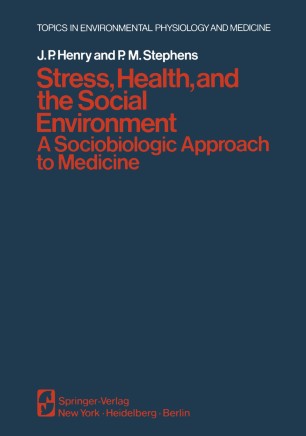 Stress, Health, and the Social Environment

A Sociobiologic Approach to Medicine

The mastery of a variety of biomedical They avoided the self-destruction and dis­ techniques has led our society to the solu­ ease that can so readily follow the escalation tion of the problems in environmental con­ of social disorder in an isolated colony. By trol imposed by space flight. By an unparal­ following a "code of civility" that may be as leled social cooperative effort, man has much a part of man's biologic inheritance as launched himself successfully on the path of his speech, they established cultures in interplanetary exploration and space travel. which power was exercised with sufficient By a like synthesis of knowledge available to respect to establish a consensus. They fol­ him, Stone Age man kept a foothold on tiny lowed revered cultural canons, using an Pacific atolls for the better part of a thousand accumulation of rational empiric data from years, despite obliterating hurricanes and social experience to modify and control the inherited biogrammar. This we often fail to limited resources. By combining empiric do. There is growing evidence that it is phys­ navigational skills, such as the sighting of stars with intuitive feeling for ocean swells iologically possible for the left hemisphere of and other subtle cues, tiny populations were the brain, which deals with logic and lan­ maintained in communication over vast dis­ guage, to be cut off from the right hemi­ tances.