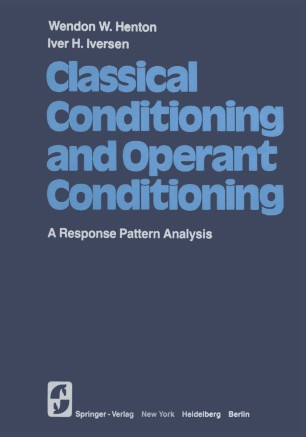 Since the appearance of the treatise on "Schedules of Reinforcement" by Ferster and Skinner over two decades ago, the literature in behavior analysis, both experimental and applied, has been dominated by a range of studies dedi­ cated to providing ever more systematic and refined accounts of these "mainsprings of behavior control. " For the most part, the analysis has been pursued in the best traditions of "scientific methodology" with careful atten­ tion to the isolation of controlling variables in unitary form. Of late, relatively simple interaction effects have provided an important additional focus for more sophisticated analyses. It is clear, however, from even a cursory survey of the monumental research and conceptual analysis which is represented in this scholarly volume by Henton and Iversen that the surface ofthis complex "be­ havioral interactions" domain has barely been scratched. The primary focus of this pioneering effort extends the competing response analysis across all experimental schedules, both classical and instrumental, as well as the interactions between the two. Appropriately, the analysis empha­ sizes overt behavioral interactions, beginning with the simplest case of one operant and one respondent, and inevitably implicating more diverse and subtle interactions. As the analysis expands to include interactions between multiple recorded responses, increasingly more precise empirical specifications ofrecip­ rocal interactions in response probabilities are revealed independently of con­ ventional procedural labels (i. e. , operants, respondents, collaterals, adjunc­ tives, etc. ) and traditional theoretical distinctions.