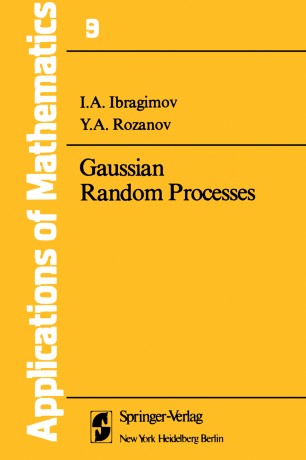 Part of the Applications of Mathematics book series (SMAP, volume 9)

The book deals mainly with three problems involving Gaussian stationary processes. The first problem consists of clarifying the conditions for mutual absolute continuity (equivalence) of probability distributions of a "random process segment" and of finding effective formulas for densities of the equiva­ lent distributions. Our second problem is to describe the classes of spectral measures corresponding in some sense to regular stationary processes (in par­ ticular, satisfying the well-known "strong mixing condition") as well as to describe the subclasses associated with "mixing rate". The third problem involves estimation of an unknown mean value of a random process, this random process being stationary except for its mean, i. e. , it is the problem of "distinguishing a signal from stationary noise". Furthermore, we give here auxiliary information (on distributions in Hilbert spaces, properties of sam­ ple functions, theorems on functions of a complex variable, etc. ). Since 1958 many mathematicians have studied the problem of equivalence of various infinite-dimensional Gaussian distributions (detailed and sys­ tematic presentation of the basic results can be found, for instance, in [23]). In this book we have considered Gaussian stationary processes and arrived, we believe, at rather definite solutions. The second problem mentioned above is closely related with problems involving ergodic theory of Gaussian dynamic systems as well as prediction theory of stationary processes.