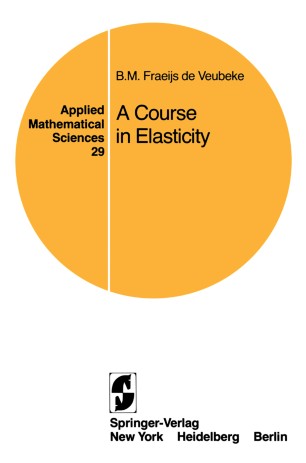 A Course in Elasticity

This book is based on lecture notes of the late Professor de Veubeke. The subject is presented at a level suitable for graduate students in engineering, physics, or mathematics. Some exposure to linear algebra, complex analysis, variational calculus, or basic continuum mechanics would be helpful. The first third of the book contains the fundamentals of the theory of elasticity. Kinematics of continuous media, the notions of stress and equilibrium, conservation of energy, 'and the elastic constitutive law are each treated first in a nonlinear context, then specialized to the linear case. The remainder of the book is given to three classic applications of the theory, each supplemented by original re­ sults based on the use of complex variables. Each one of the three topics - Saint-Venant's theory of prismatic beams, plane deformations, and the bending of plates - is first pre­ sented and analyzed in general, then rounded out with numerous specific and sometimes novel examples. The following notational conventions are generally in force, except where noted to the contrary: lower case boldface letters denote vectors or triples of Cartesian co­ ordinates, upper case boldface letters denote 3 x 3 matrices, repeated lower case Latin subscripts are summed over (1,2,3), and non-repeated lower case Latin subscripts are assumed to range over (1,2,3).