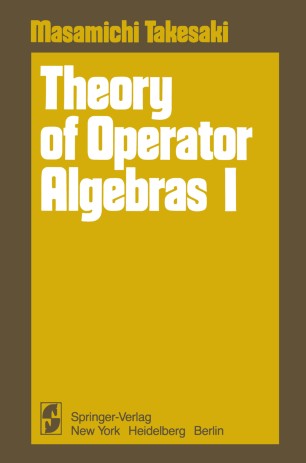 Theory of Operator Algebras I

Mathematics for infinite dimensional objects is becoming more and more important today both in theory and application. Rings of operators, renamed von Neumann algebras by J. Dixmier, were first introduced by J. von Neumann fifty years ago, 1929, in [254] with his grand aim of giving a sound founda­ tion to mathematical sciences of infinite nature. J. von Neumann and his collaborator F. J. Murray laid down the foundation for this new field of mathematics, operator algebras, in a series of papers, [240], [241], [242], [257] and [259], during the period of the 1930s and early in the 1940s. In the introduction to this series of investigations, they stated Their solution 1 {to the problems of understanding rings of operators) seems to be essential for the further advance of abstract operator theory in Hilbert space under several aspects. First, the formal calculus with operator-rings leads to them. Second, our attempts to generalize the theory of unitary group-representations essentially beyond their classical frame have always been blocked by the unsolved questions connected with these problems. Third, various aspects of the quantum mechanical formalism suggest strongly the elucidation of this subject. Fourth, the knowledge obtained in these investigations gives an approach to a class of abstract algebras without a finite basis, which seems to differ essentially from all types hitherto investigated. Since then there has appeared a large volume of literature, and a great deal of progress has been achieved by many mathematicians.