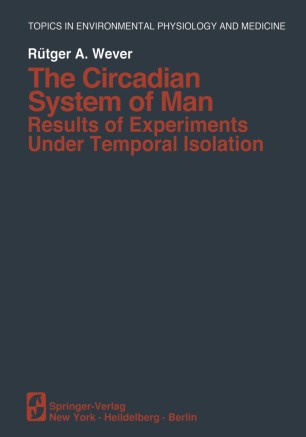 The Circadian System of Man

Results of Experiments Under Temporal Isolation

Biological rhythmicity has been a subject of scientific research for a relatively short time. In the special case of daily, or circadian rhythms, it is only during the past twenty years that rapidly increasing efforts have been undertaken in evaluat­ ing properties and mechanisms. As a consequence of these efforts, the study of biological and, in particular, circadian rhythmicity is no longer a somewhat dubious occupation but rather a serious branch of science which combines the interdisciplinary efforts of numerous researchers around the world. The general result of these efforts is that many features of circadian rhythms of many different species of living beings are well known today. In addition to studies with lower organisms, the evaluation of human circadian rhythms was originally more or less a compulsory exercise done in order to extend the "catalogue of species"; of course, the work was of unusual impor­ tance due to the special position of man in biology. In the course of the very first experimental series, it became clear that humans possess an "internal clock" as had been established in various organisms, protists, plants, and animals, and that human circadian rhythms fit the general regularities of biological rhythms known at that time. However, it soon became apparent that circadian rhythmicity of man shows, additionally, particularities of great general interest, for practical and theoretical reasons.