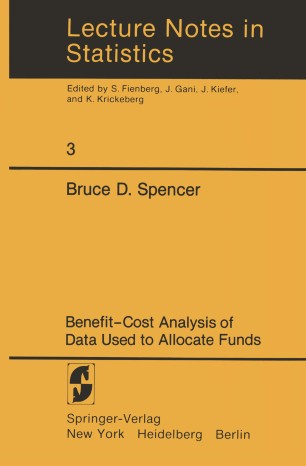 This monograph treats the question of determining how much to spend for the collection and analysis of public data. This difficult problem for government statisticians and policy-makers is likely to become even more pressing in the near future. The approach taken here is to estimate and compare the benefits and costs of alternative data programs. Since data are used in many ways, the benefits are hard to measure. The strategy I have adopted focuses on use of data to determine fund allocations, particularly in the General Revenue Sharing program. General Revenue Sharing is one of the largest allocation programs in the United States. That errors in population counts and other data cause sizable errors in allocation has been much publicized. Here we analyze whether the accuracy of the 1970 census of population and other data used by General Revenue Sharing should be improved. Of course it is too late to change the 1970 census program, but the method and techniques of analysis will apply to future data programs. In partic­ ular, benefit-cost analyses such as this are necessary for informed decisions about whether the expense of statistical programs is justi­ fied or not. For example, although a law authorizing a mid-decade census was enacted in 1976, there exists great doubt whether funds will be provided so a census can take place in 1985. (The President's Budget for 1981 allows no money for the mid-decade census, despite the Census Bureau's request for $1. 9 million for planning purposes.