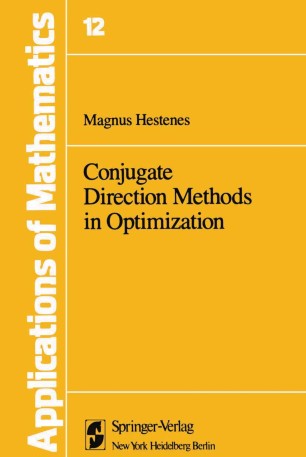 Part of the Applications of Mathematics book series (SMAP, volume 12)

Shortly after the end of World War II high-speed digital computing machines were being developed. It was clear that the mathematical aspects of com­ putation needed to be reexamined in order to make efficient use of high-speed digital computers for mathematical computations. Accordingly, under the leadership of Min a Rees, John Curtiss, and others, an Institute for Numerical Analysis was set up at the University of California at Los Angeles under the sponsorship of the National Bureau of Standards. A similar institute was formed at the National Bureau of Standards in Washington, D. C. In 1949 J. Barkeley Rosser became Director of the group at UCLA for a period of two years. During this period we organized a seminar on the study of solu­ tions of simultaneous linear equations and on the determination of eigen­ values. G. Forsythe, W. Karush, C. Lanczos, T. Motzkin, L. J. Paige, and others attended this seminar. We discovered, for example, that even Gaus­ sian elimination was not well understood from a machine point of view and that no effective machine oriented elimination algorithm had been developed. During this period Lanczos developed his three-term relationship and I had the good fortune of suggesting the method of conjugate gradients. We dis­ covered afterward that the basic ideas underlying the two procedures are essentially the same. The concept of conjugacy was not new to me. In a joint paper with G. D.