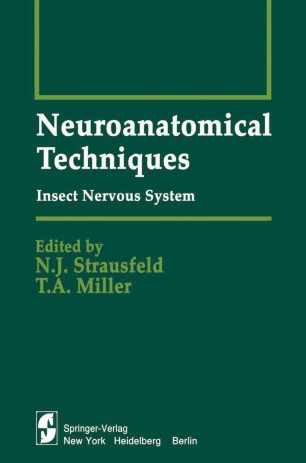 Most neurobiological research is performed on vertebrates, and it is only natural that most texts describing neuroanatomical methods refer almost exclusively to this Phylum. Nevertheless, in recent years insects have been studied intensively and are becoming even more popular in some areas of research. They have advantages over vertebrates with respect to studying genetics of neuronal development and with respect to studying many aspects of integration by uniquely identifiable nerve cells. Insect central nervous system is characterized by its compactness and the rather large number of nerve cells in a structure so small. But despite their size, parts of the insect eNS bear structural comparisons with parts of vertebrate eNS. This applies particularly to the organization of the thoracic ganglia (and spinal cord), to the insect and vertebrate visual sys­ tems and, possibly, to parts of the olfactory neuropils. The neurons that make up these areas in insects are often large enough to be impaled by microelectrodes and can be injected with dyes. Added to advantages of using a small eNS, into which the sensory periphery is precisely mapped, are the many aspects of insect behaviour whose components can be quan­ titized and which may find both structural and functional correlates within clearly defined regions of neuropil. Together, these various features make the insect eNS a rewarding object for study. This volume is the first of two that describe both classic and recent methods for neuroanatomical research on insect eNS.