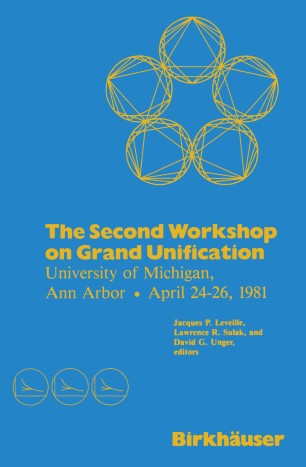 The Second Workshop on Grand Unification

Recently there has been rapid progress towards understanding the separate theories of the strong, weak and electromagnetic inter­ actions within the framework of the standard SU(3) x SU(2) x U(l) model. The purpose of the Second Workshop on Grand Unification was to discuss the physics beyond the standard model and the major topic was grand unified theories which unify the strong, weak and electromagnetic sectors. Grand unified theories are presently being used to calculate experimentally accessible quantities such as the proton lifetime and nucleon decay branching ratios. Meanwhile, experiments are currently being performed, and new, dedicated experiments mounted, to measure these quantities. Reports on these experimental and theoretical activities occupied much of the workshop. Furthermore, since grand unified theories allow one to extrapolate the behavior of the universe back to the first instants after the big bang, their cosmological implications and the constraints on these theories from cosmology were of great interest at the workshop. The conference opened with a keynote address by S. L. Glashow in which he discussed among other topics baryon minus lepton number conservation, neutrino masses and a neutrino-free universe. To maximize the interplay between theorists and experimentalists, theoretical and experimental talks were interleaved. An experimental highlight of the workshop was the presentation by S. Miyake of three candidate events for proton decay.