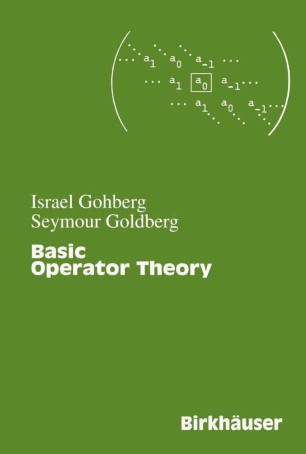 rii application of linear operators on a Hilbert space. We begin with a chapter on the geometry of Hilbert space and then proceed to the spectral theory of compact self adjoint operators; operational calculus is next presented as a nat­ ural outgrowth of the spectral theory. The second part of the text concentrates on Banach spaces and linear operators acting on these spaces. It includes, for example, the three 'basic principles of linear analysis and the Riesz­ Fredholm theory of compact operators. Both parts contain plenty of applications. All chapters deal exclusively with linear problems, except for the last chapter which is an introduction to the theory of nonlinear operators. In addition to the standard topics in functional anal­ ysis, we have presented relatively recent results which appear, for example, in Chapter VII. In general, in writ­ ing this book, the authors were strongly influenced by re­ cent developments in operator theory which affected the choice of topics, proofs and exercises. One of the main features of this book is the large number of new exercises chosen to expand the reader's com­ prehension of the material, and to train him or her in the use of it. In the beginning portion of the book we offer a large selection of computational exercises; later, the proportion of exercises dealing with theoretical questions increases. We have, however, omitted exercises after Chap­ ters V, VII and XII due to the specialized nature of the subject matter.