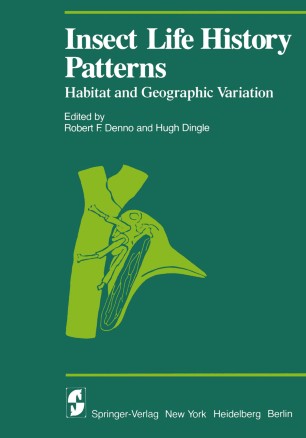 This volume results from a symposium entitled "Species and Ufe History Patterns: Geographic and Habitat Variation", held during the National Meeting of the Entomo­ logical Society of America in Denver, Colorado, USA in November, 1979. The stimu­ lus to assemble papers on this theme emerged from continuing discussions with col­ leagues concerning controversies in ecology and evolutionary biology, namely those associated with plant-herbivore interactions, life history theory, and the equilibrium status of communities. The study organisms used in this series of reports are all either herbivorous insects or those intimately associated with plants. In this volume we stress the variation found in life history traits and address some of the problems inherent in current life history theory. We include as life history traits not only traditional variables such as fecundity, size of young, and age to first and peak reproduction, but also diapause and migration, traits that synchronize reproduction with favorable plant resources. Because life history traits of phytophagous insects are influenced in part by spatial and temporal variation in the quality and availability of their host plants, we also consider the role that dis­ continuities in plant quality play in reducing insect fitness. Lastly, much of the tra­ ditional life history theory concerns itself with differences between the evolution of traits or constellations of traits when populations incur primarily density-independent, compared to density-dependent, mortality. Consequently, we address this issue and attempt to shed light on the equilibrium status of several phytophagous insect com­ munities.