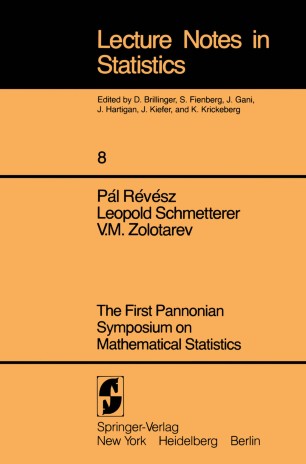 The first Pannonian Symposium on Mathematical Statistics was held at Bad Tatzmannsdorf (Burgenland/Austria) from September 16th to 21st, 1979. The aim of it was to furthe~ and intensify scientific cooperation in the Pannonian area, which, in a broad sense, can be understood to cover Hungary, the eastern part of Austria, Czechoslovakia, and parts of Poland, ¥ugoslavia and Romania. The location of centers of research in mathematical statistics and probability theory in this territory has been a good reason for the geographical limitation of this meeting. About 70 researchers attended this symposium, and 49 lectures were delivered; a considerable part of the presented papers is collected in this volume. Beside the lectures, vigorous informal discussions among the participants took place, so that many problems were raised and possible ways of solutions were attacked. We take the opportunity to thank Dr. U. Dieter (Graz), Dr. F. Konecny (Wien), Dr. W. Krieger (G8ttingen) and Dr. E. Neuwirth (Wien) for their valuable help in the refereeing work for this volume. The Pannonian Symposium could not have taken place without the support of several institutions: The Austrian Ministry for Research and Science, the State government of Burgenland, the Community Bad Tatzmannsdorf, the Kurbad Tatzmannsdorf AG, the Austrian Society for Information Science and Statistics, IBM Austria, Volksbank Oberwart, Erste Osterreichische Spar-Casse and Spielbanken AG Austria. The Austrian Academy of Sciences iv made possible the participation in the Symposium for several mathematicians. We express our gratitude to all these institutions for their generous help.