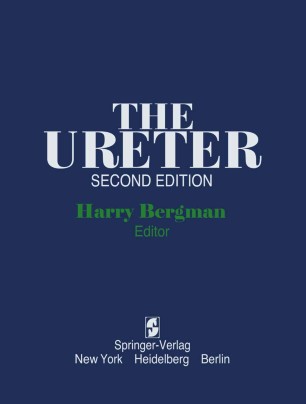 This volume, focusing on the ureter and the diseases which involve it, is an updated second edition. Many journals and textbooks deal with the physiology, pathology, diagnosis, and therapy of derangements of the urinary tract. In most instances, however, the discussion properly centers on the disease process itself and its primary aspects, with only a tan­ gential description of effects on the ureter. The editor is therefore correct that the ureter itself should be considered a major organ. Though it has been regarded in the recent past as a simple muscular tube, reacting to stretching or filling by contraction, this simplistic view of ureteral phys­ iology is changing fast. With expanded knowledge of ureteral physiology, a pharmacology is developing which is becoming useful to the clinician in many ways. One of the most interesting aspects of the ureter is its role in inducing the permanent kidney, the metanephros. Relatively slight displacements in the origin of the ureteral bud result in ectopic ureteral orifices and a wide range of congenital anomalies. An ureteral bud which arises medial to the normal position at the genu of the mesonephric duct results in a lateral, and usually incompetent, ureterovesical junction after the duct is taken up to form a portion ofthe trigone. This appears certainly to be the developmental mechanism which results in primary reflux.