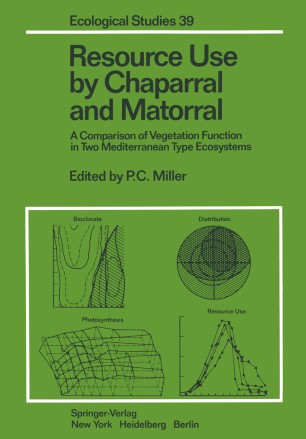 Resource Use by Chaparral and Matorral

A Comparison of Vegetation Function in Two Mediterranean Type Ecosystems

The comparative study of mediterranean type ecosystems has gained considerable momentum during the past two decades. Modem studies on these systems date from the work of Ray Specht, who studied the dynamics of the heath vegetation of south­ ern Australia. The results of these studies first appeared in 1957 (Specht and Rayson, 1957) and were summarized in 1973 (Specht, 1973). Specht followed this detailed work, which pointed to the central role of nutrients in limiting the productivity of the Australian heath, with a general comparison of the structural features of woody plant communities in mediterranean type ecosystems of Australia, southern France, and southern California (Specht, 1969a,b). The comparative studies emphasized remark­ able convergent features of these ecosystems, particularly in relation to structural features affecting primary production. Naveh (l967) also did comparative studies focusing on grassland types that occur in the mediterranean climatic zones of Califor­ nia and IsraeL About this same time, independent studies by Mooney and Dunn (1970 a,b) and Mooney et al. (1970) made preliminary structural and functional comparisons of the vegetations of mediterranean type ecosystems in California and Chile in an at­ tempt to derive an evolutionary model explaining the basis of their convergent natures. Much of the knowledge of these ecosystems up to 1973 was summarized in volume 7 of Ecological Studies, Medite"anean Type Ecosystems: Origin and Structure (di Castri and Mooney, 1973). This volume builds on its series predecessor in many ways.