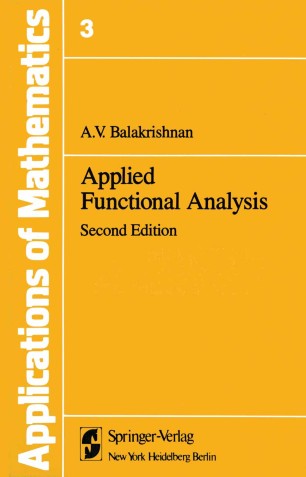 In preparing the second edition, I have taken advantage of the opportunity to correct errors as well as revise the presentation in many places. New material has been included, in addition, reflecting relevant recent work. The help of many colleagues (and especially Professor J. Stoer) in ferreting out errors is gratefully acknowledged. I also owe special thanks to Professor v. Sazonov for many discussions on the white noise theory in Chapter 6. February, 1981 A. V. BALAKRISHNAN v Preface to the First Edition The title "Applied Functional Analysis" is intended to be short for "Functional analysis in a Hilbert space and certain of its applications," the applications being drawn mostly from areas variously referred to as system optimization or control systems or systems analysis. One of the signs of the times is a discernible tilt toward application in mathematics and conversely a greater level of mathematical sophistication in the application areas such as economics or system science, both spurred undoubtedly by the heightening pace of digital computer usage. This book is an entry into this twilight zone. The aspects of functional analysis treated here are rapidly becoming essential in the training at the advance graduate level of system scientists and/or mathematical economists. There are of course now available many excellent treatises on functional analysis.