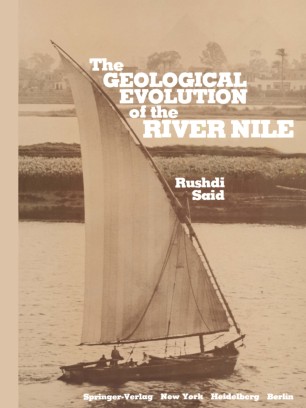 The GEOLOGICAL EVOLUTION of the RIVER NILE

This book gives the geological history of the river Nile since it started to excavate its course in the Egyptian plateaus in late Miocene time in response to the lowering sea level of the desic­ cating Mediterranean. It formed a canyon longer, deeper, and just as awe inspiring as the Grand Canyon, Arizona. The canyon was transgressed by the advancing Mediterranean as it started filling during the early Pliocene, and since then by a number of rivers which ebbed and flowed as they succeeded one another. The modern Nile is a recent and humble successor to mighty rivers which once occupied the Nile Valley. Dallas, Texas Rushdi Said August 1981 Acknowledgments This book is based on field work carried out in Egypt during the seasons 1961-1978 while the author was a member of the Com­ bined Prehistoric Expedition sponsored by Southern Methodist University, the Polish Academy of Science, and the Geological Survey of Egypt. Grateful acknowledgment is made to Professor Fred Wendorf, leader of the Expedition, and to several members for their fruitful discussions. Notable among these arepr. Claude Albritton, Southern Methodist University, and Dr. J. De Heinze­ lin, University of Ghent, Belgium. The field work was aided by geologists M. S. Abdel Ghany and A. Zaghloul of the Geological Survey of Egypt. The drafting was by Reed Ellis and Hoda S. Ar­ manious. I am also grateful to Dr. M. K.