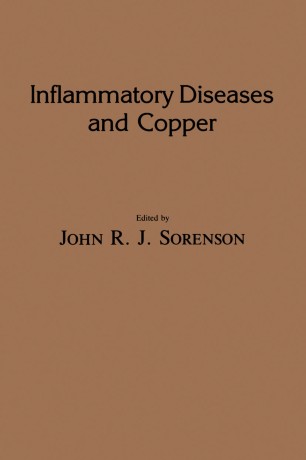 In 1928, it was discovered that copper was essential for normal human metabolism. A decade later, in 1938, it was observed that patients with rheu­ matoid arthritis exhibited a higher than normal serum copper concentration that returned to normal with remission of this disease. Thirteen years later, it was found that copper complexes were effective in treating arthritic dis­ eases. The first report that copper complexes had antiinflammatory activity in an animal model of inflammation appeared twenty-two years after the dis­ covery of essentiality. In 1976, it was suggested that the active forms of the antiarthritic drugs are their copper complexes formed in vivo. This sugges­ tion has been confirmed and extended in the interim in over 200 recent publications. Individual biomedical scientists from many countries who have published in these areas recently saw a need for a meeting to exchange current re­ supporting new hypotheses. We search results and discuss the evidence met on the University of Arkansas Medical Sciences campus in Little Rock, Arkansas, August 10-13, 1981. Participants came from Australia, England, France, Germany, Israel, Italy, The Netherlands, Norway, Poland, Scotland, Sweden, Switzerland, Wales, Zimbabwe, and over twenty of the United States.