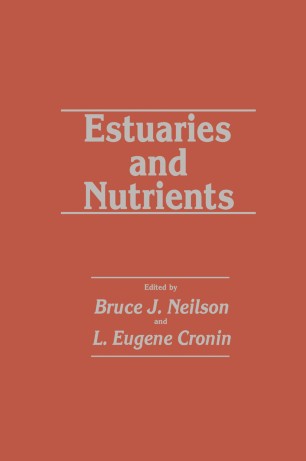 Estuaries are eternally enriched. Their positions at the foot of watersheds and their convenience as receiving bodies for the wastes of cites, towns and farms results in continuous addition of nutrients - those elements and compounds which are essential for organic production. Such materials must be added to these complex bodies of water to sustain production, since there is a net loss of water and its contents to the oceans. Enrichment from land and the ocean and the subsequent cycling of the original chemicals or their derivatives contribute to the extraordinarily high values of estuaries for human purposes. Many estuaries are able to assimilate large quantities of nutrients despite the great fluctuations which occur with variations in the flow from tributaries. The nutrients can be stored, incorporated in standing crops of plants, released, cycled and exported - and the system frequently achieves high production of plants and and animals without creation of any undesirable results of enrichment. Excessive enrichment with the same elements and compounds can, however, be highly detrimental to estuaries and their uses. Coastal cities are usually located on the estuaries which provided a harbor for the- and which now receive partially treated sewage and other wastes from the expanding population and industrial activity. Conversion of woodlands to agricultural use and the extensive application of fertilizers have resulted in the flow of large quantities of nutrients down the hill or slopes and eventually into the estuary.