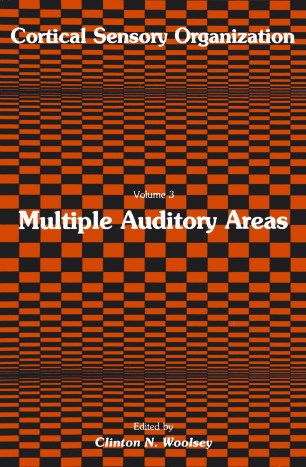 In April 1979 a symposium on "Multiple Somatic Sensory Motor, Visual and Auditory Areas and Their Connectivities" was held at the FASEB meeting in Dallas, Texas under the auspices of the Committee on the Nervous System of the American Physiological Society. The papers presented at that symposium are the basis of most of the substantially augmented, updated chapters in the three volumes of Cortical Sensory Organization. Only material in chap­ ter 8 of volume 3 was not presented at that meeting. The aim of the symposium was to review the present status of the field of cortical representation in the somatosensory, visual and auditory systems. Since the early 1940s, the number of recognized cortical areas related to each of these systems has been increasing until at present the number of visually related areas exceeds a dozen. Although the number is less for the somatic and auditory systems, these also are more numerous than they were earlier and are likely to increase still further since we may expect each system to have essentially the same number of areas related to it.