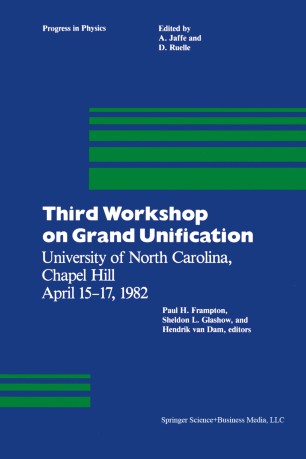 Part of the Progress in Physics book series (PMP, volume 6)

This workshop held at the University of North Carolina was in the series which started with meetings in the University of New Hampshire (April 1980) and the University of Michigan (April 1981). More than one hundred participants congregated in the Carolina Inn in April 1982 to discuss the status of grand unified theories and their connection to experiment. The spring foliage of Chapel Hill provided a beautiful back-drop to this Third Workshop on Grand Unification. As mentioned in the first talk herein, these three workshops have heard of indications, respectively, of neutrino oscillations, proton decay and a magnetic monopole. Since all three experimental reports remain unconfirmed, grand unifiers must wait expectantly and patiently. These proceedings preserve faithfully the ordering of the workshop talks which followed the tradition of alternation between theory and experiment. Only our introduction will segregate them. The experimental presentations mainly concerned proton decay and massive neutrinos. Four U.S. proton decay experiments were reported: the Brookhaven­ Irvine-Michigan experiment in the Morton Salt Mine at Fairport Harbor, Ohio was described by WILLIAM KROPP, and ROBERT MORSE represented the Harvard-Purdue-Wisconsin group in the Silver King Mine, Utah. The Homestake Mine, South Dakota and Soudan Mine, Minnesota, experiments were reported respectively by RICHARD STEINBERG and DAVID AYRES, the latter providing also a survey of future U.S. experiments.