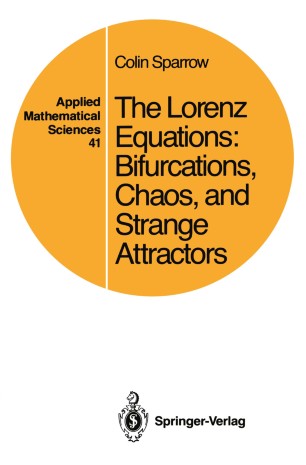 The equations which we are going to study in these notes were first presented in 1963 by E. N. Lorenz. They define a three-dimensional system of ordinary differential equations that depends on three real positive parameters. As we vary the parameters, we change the behaviour of the flow determined by the equations. For some parameter values, numerically computed solutions of the equations oscillate, apparently forever, in the pseudo-random way we now call "chaotic"; this is the main reason for the immense amount of interest generated by the equations in the eighteen years since Lorenz first presented them. In addition, there are some parameter values for which we see "preturbulence", a phenomenon in which trajectories oscillate chaotically for long periods of time before finally settling down to stable stationary or stable periodic behaviour, others in which we see "intermittent chaos", where trajectories alternate be­ tween chaotic and apparently stable periodic behaviours, and yet others in which we see "noisy periodicity", where trajectories appear chaotic though they stay very close to a non-stable periodic orbit. Though the Lorenz equations were not much studied in the years be­ tween 1963 and 1975, the number of man, woman, and computer hours spent on them in recent years - since they came to the general attention of mathematicians and other researchers - must be truly immense.