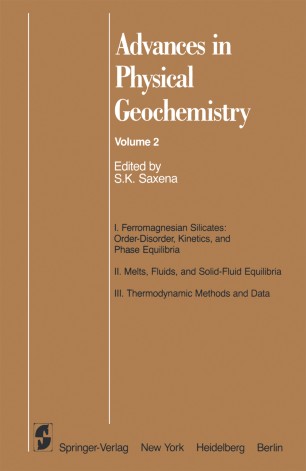 The second volume of this series consists of three parts. Part I focuses on the research on intracrystalline reactions. This work, which began nearly two decades ago, is critically reviewed by Ghose and Ganguly in Chapter 1. Besides the review, the authors include some of their previously unpublished work to demonstrate how future research could aid in obtaining data on thermodynamics of solid solutions and in understanding the cooling history of igneous and metamorphic rocks. The latter is also the theme adopted by Kretz in the second chapter, which examines the redistribution of Fe and Mg in coexisting silicates during cooling. Chapter 3 contains new data on Fe-Mg distribution in clinopyroxenes. Dal Negro and his co-authors have selected a series of clinopyroxenes from volcanic rocks and present site occupancy data on several clinopyroxenes of intermediate compositions. The data set has not been published before and is the first of its kind. Part II of this book begins with a chapter on melts by Gaskell, who explores the relationship between density and structure of silicate melts. This is followed by the synthesis of data generated in the U.S.S.R. by Shmulovich and his co-authors on fluids. Blencoe, Merkel and Seil present a thorough analysis of the phase equilibrium data on feldspars coexisting with fluids in the third chapter in this part.