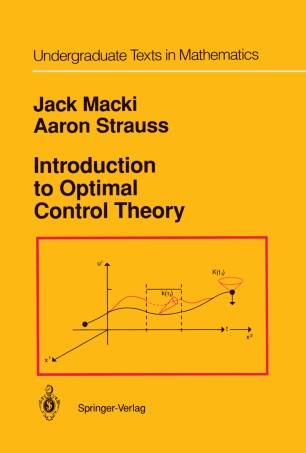 This monograph is an introduction to optimal control theory for systems governed by vector ordinary differential equations. It is not intended as a state-of-the-art handbook for researchers. We have tried to keep two types of reader in mind: (1) mathematicians, graduate students, and advanced undergraduates in mathematics who want a concise introduction to a field which contains nontrivial interesting applications of mathematics (for example, weak convergence, convexity, and the theory of ordinary differential equations); (2) economists, applied scientists, and engineers who want to understand some of the mathematical foundations. of optimal control theory. In general, we have emphasized motivation and explanation, avoiding the "definition-axiom-theorem-proof" approach. We make use of a large number of examples, especially one simple canonical example which we carry through the entire book. In proving theorems, we often just prove the simplest case, then state the more general results which can be proved. Many of the more difficult topics are discussed in the "Notes" sections at the end of chapters and several major proofs are in the Appendices. We feel that a solid understanding of basic facts is best attained by at first avoiding excessive generality. We have not tried to give an exhaustive list of references, preferring to refer the reader to existing books or papers with extensive bibliographies. References are given by author's name and the year of publication, e.g., Waltman [1974].