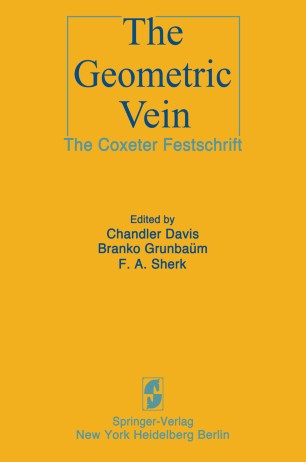 Geometry has been defined as that part of mathematics which makes appeal to the sense of sight; but this definition is thrown in doubt by the existence of great geometers who were blind or nearly so, such as Leonhard Euler. Sometimes it seems that geometric methods in analysis, so-called, consist in having recourse to notions outside those apparently relevant, so that geometry must be the joining of unlike strands; but then what shall we say of the importance of axiomatic programmes in geometry, where reference to notions outside a restricted reper­ tory is banned? Whatever its definition, geometry clearly has been more than the sum of its results, more than the consequences of some few axiom sets. It has been a major current in mathematics, with a distinctive approach and a distinc­ ti v e spirit. A current, furthermore, which has not been constant. In the 1930s, after a period of pervasive prominence, it appeared to be in decline, even passe. These same years were those in which H. S. M. Coxeter was beginning his scientific work. Undeterred by the unfashionability of geometry, Coxeter pursued it with devotion and inspiration. By the 1950s he appeared to the broader mathematical world as a consummate practitioner of a peculiar, out-of-the-way art. Today there is no longer anything that out-of-the-way about it. Coxeter has contributed to, exemplified, we could almost say presided over an unanticipated and dra­ matic revival of geometry.