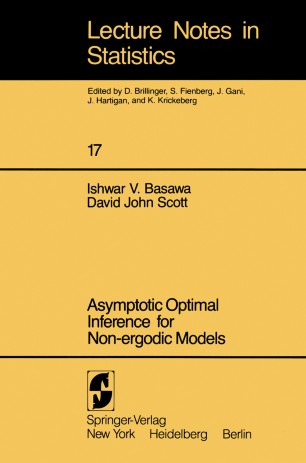 This monograph contains a comprehensive account of the recent work of the authors and other workers on large sample optimal inference for non-ergodic models. The non-ergodic family of models can be viewed as an extension of the usual Fisher-Rao model for asymptotics, referred to here as an ergodic family. The main feature of a non-ergodic model is that the sample Fisher information, appropriately normed, converges to a non-degenerate random variable rather than to a constant. Mixture experiments, growth models such as birth processes, branching processes, etc. , and non-stationary diffusion processes are typical examples of non-ergodic models for which the usual asymptotics and the efficiency criteria of the Fisher-Rao-Wald type are not directly applicable. The new model necessitates a thorough review of both technical and qualitative aspects of the asymptotic theory. The general model studied includes both ergodic and non-ergodic families even though we emphasise applications of the latter type. The plan to write the monograph originally evolved through a series of lectures given by the first author in a graduate seminar course at Cornell University during the fall of 1978, and by the second author at the University of Munich during the fall of 1979. Further work during 1979-1981 on the topic has resolved many of the outstanding conceptual and technical difficulties encountered previously. While there are still some gaps remaining, it appears that the mainstream development in the area has now taken a more definite shape.