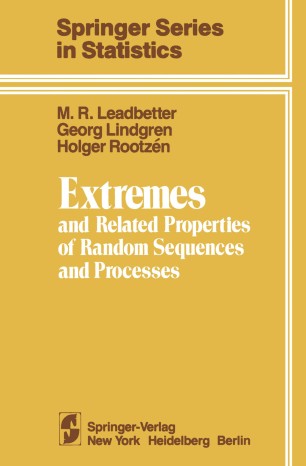 Extremes and Related Properties of Random Sequences and Processes

Classical Extreme Value Theory-the asymptotic distributional theory for maxima of independent, identically distributed random variables-may be regarded as roughly half a century old, even though its roots reach further back into mathematical antiquity. During this period of time it has found significant application-exemplified best perhaps by the book Statistics of Extremes by E. J. Gumbel-as well as a rather complete theoretical development. More recently, beginning with the work of G. S. Watson, S. M. Berman, R. M. Loynes, and H. Cramer, there has been a developing interest in the extension of the theory to include, first, dependent sequences and then continuous parameter stationary processes. The early activity proceeded in two directions-the extension of general theory to certain dependent sequences (e.g., Watson and Loynes), and the beginning of a detailed theory for stationary sequences (Berman) and continuous parameter processes (Cramer) in the normal case. In recent years both lines of development have been actively pursued.