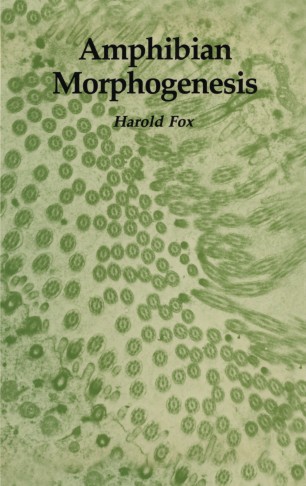 This book came about as a result of a review I had written earlier on fea­ tures of cellular changes occurring during anuran metamorphosis. Only a limited treatment of this subject was possible in such a circumscribed work and only specific examples of organic change were dealt with. Thus the sins of omission weighed heavily, for so much information could not be included to provide a more comprehensive and authenticated account of the elaborate, complex, and far-reaching changes that an aquatic larva undergoes to become a terrestrial froglet. A good deal of my working life has been spent investigating amphib­ ians, especially their larval developmental morphology during metamor­ phosis, first at the level of light microscopy and in later years by electronmicroscopy. Initially I was particularly concerned with morpho­ logical homologies of a variety of larval structures, such as the cranial and pharyngeal skeleton and the nerves and musculature, in order to learn more about amphibian phylogeny, for during my pre-and early postgrad­ uate years G. R. Beer and D. M. S. Watson inspired an undying interest in and respect for vertebrate comparative anatomy. However, it now seems to be that amphibian phylogenetic relationships are best dealt with by the paleontologists, so ably demonstrated by D. M. S. Watson and A. S. Romer and the contemporary enthusiasts in this field like A. L. Panchen, R. L. Carroll, E. Jarvik, and K. S. Thompson among a host of others, particularly in the USA.