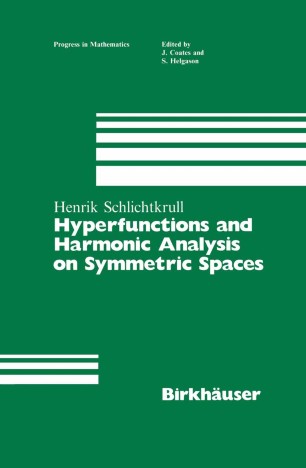 Part of the Progress in Mathematics book series (PM, volume 49)

During the last ten years a powerful technique for the study of partial differential equations with regular singularities has developed using the theory of hyperfunctions. The technique has had several important applications in harmonic analysis for symmetric spaces.

This book gives an introductory exposition of the theory of hyperfunctions and regular singularities, and on this basis it treats two major applications to harmonic analysis. The first is to the proof of Helgason’s conjecture, due to Kashiwara et al., which represents eigenfunctions on Riemannian symmetric spaces as Poisson integrals of their hyperfunction boundary values.

A generalization of this result involving the full boundary of the space is also given. The second topic is the construction of discrete series for semisimple symmetric spaces, with an unpublished proof, due to Oshima, of a conjecture of Flensted-Jensen.

This first English introduction to hyperfunctions brings readers to the forefront of research in the theory of harmonic analysis on symmetric spaces. A substantial bibliography is also included. This volume is based on a paper which was awarded the 1983 University of Copenhagen Gold Medal Prize.