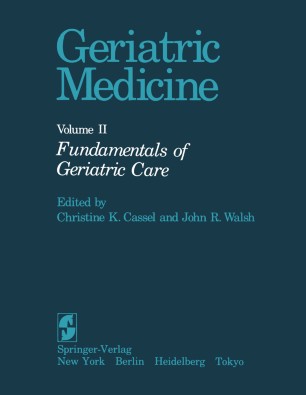 With the appearance of a textbook as comprehensive as this one, it is clear that the field of geriatrics is coming of age. The broad scope of these volumes shapes a substantial answer to the question, "What is geriatrics and why should we be interested in it?" As I see it, there are at least five reasons. First, the scientific or intellectual reason: gerontology is the study of aging from the biologic, psychological, and social perspectives. There is increasing interest in the fascinating insights into the biologic mechanisms of aging, errors in protein synthesis, DNA repair mechanisms, alterations of the neuroendocrine system, changes in the immune system, genetic controls, and somatic mutations. Second, the demographic reason: this is the century of old age. There has been a 26-year gain in the average life expectancy. This gain compares with that acquired from 3,000 years B.C. (the Bronze Age) to the year 1900, which was about 29 years. Therefore, in one century, there has been a gain in the average life expectancy almost equal to 5,000 previous years of human history. In 1830, one of three newborn infants survived beyond 60 years of age.