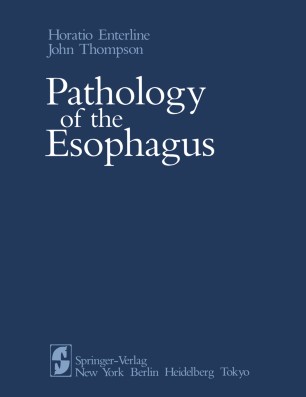 Pathology of the Esophagus

This book is the first of a planned series of texts on pathology of the gastrointestinal tract. The authors have long thought that texts on pathology ofthe gastrointestinal tract tend to cover the clinical aspects, pathophysiology, and radiology in a rather sketchy fashion. The pa­ thologist is often left with an incomplete understanding of the problem at hand. Indeed, even the pathologic aspects of diseases of the esophagus are given relatively short shrift in textbooks on gastrointestinal pa­ thology. In an effort to rectify this situation, the authors have culled infor­ mation from a wide variety of sources to describe in greater depth than usual, the clinical pl"esentation, diagnosis, and pathophysiology, and the morphologic aspects of esophageal disease. While the book is pri­ marily geared for pathologists, it is expected that this volume will also be an aid to internists, gastroenterologists, surgeons, radiologists, and other clinicians who wish to gain a better understanding of the path­ ologic processes involved in the many clinical conditions in which esoph­ ageal dysfunction is a factor. Pathologists are being challenged by new diagnostic puzzles in the esophageal area; it is hoped that this text will assist them in meeting these challenges. The esophagus tends to be neglected in autopsy examinations despite its important contribution to human illness. Much remains to be learned.