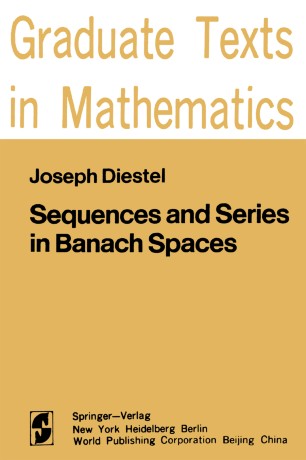 Sequences and Series in Banach Spaces

This volume presents answers to some natural questions of a general analytic character that arise in the theory of Banach spaces. I believe that altogether too many of the results presented herein are unknown to the active abstract analysts, and this is not as it should be. Banach space theory has much to offer the prac­ titioners of analysis; unfortunately, some of the general principles that motivate the theory and make accessible many of its stunning achievements are couched in the technical jargon of the area, thereby making it unapproachable to one unwilling to spend considerable time and effort in deciphering the jargon. With this in mind, I have concentrated on presenting what I believe are basic phenomena in Banach spaces that any analyst can appreciate, enjoy, and perhaps even use. The topics covered have at least one serious omission: the beautiful and powerful theory of type and cotype. To be quite frank, I could not say what I wanted to say about this subject without increasing the length of the text by at least 75 percent. Even then, the words would not have done as much good as the advice to seek out the rich Seminaire Maurey-Schwartz lecture notes, wherein the theory's development can be traced from its conception. Again, the treasured volumes of Lindenstrauss and Tzafriri also present much of the theory of type and cotype and are must reading for those really interested in Banach space theory.