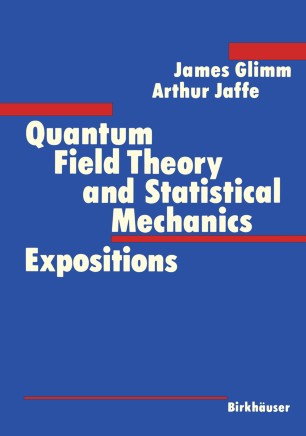 This volume contains a selection of expository articles on quantum field theory and statistical mechanics by James Glimm and Arthur Jaffe. They include a solution of the original interacting quantum field equations and a description of the physics which these equations contain. Quantum fields were proposed in the late 1920s as the natural framework which combines quantum theory with relativ­ ity. They have survived ever since. The mathematical description for quantum theory starts with a Hilbert space H of state vectors. Quantum fields are linear operators on this space, which satisfy nonlinear wave equations of fundamental physics, including coupled Dirac, Max­ well and Yang-Mills equations. The field operators are restricted to satisfy a "locality" requirement that they commute (or anti-commute in the case of fer­ mions) at space-like separated points. This condition is compatible with finite propagation speed, and hence with special relativity. Asymptotically, these fields converge for large time to linear fields describing free particles. Using these ideas a scattering theory had been developed, based on the existence of local quantum fields.