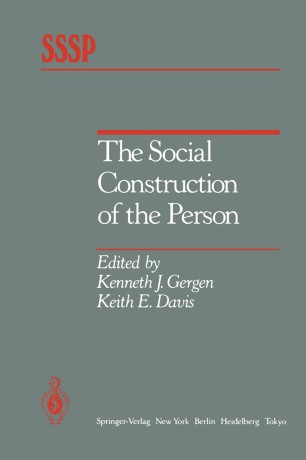 The Social Construction of the Person

This volume grew out of a discussion between the editors at the Society for Experimental Social Psychology meeting in Nashville in 1981. For many years the Society has played a leading role in encouraging rigorous and sophisticated research. Yet, our discussion that day was occupied with what seemed a major problem with this fmely honed tradition; namely, it was preoccupied with "accurate renderings of reality," while generally insensitive to the process by which such renderings are achieved. This tradition presumed that there were "brute facts" to be discovered about human interaction, with little consideration of the social processes through which "factuality" is established. To what degree are accounts of persons constrained by the social process of rendering as opposed to the features of those under scrutiny? This concern with the social process by which persons are constructed was hardly ours alone. In fact, within recent years such concerns have been voiced with steadily increasing clarity across a variety of disciplines. Ethno­ methodologists were among the first in the social sciences to puncture the taken-for-granted realities of life. Many sociologists of science have also turned their attention to the way social organizations of scientists create the facts necessary to sustain these organizations. Historians of science have entered a similar enterprise in elucidating the social, economic and ideological conditions enabling certain formulations to flourish in the sciences while others are suppressed. Many social anthropologists have also been intrigued by cross-cultural variations in the concept of the human being.