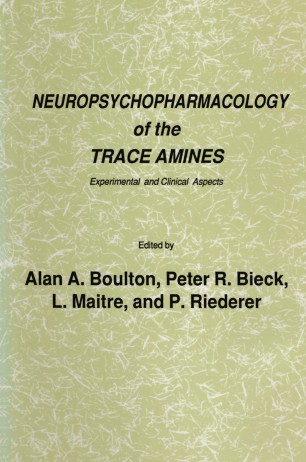 Neuropsychopharmacology of the Trace Amines

A probable neurobiological role for the trace amines began to emerge as soon as techniques sufficiently sophisticated to detect them were developed. Techniques for quantitative analyses included radioenzymatic procedures and, more recently, HPlC-EC and auto­ mated GC-MS. The methods are applied after separation of the sub­ stances to be analyzed and after their purification by physicochemical procedures that are becoming more and more efficient. The identification and quantitative analysis of minute amounts of trace amines in biological fluids or tissues is in itself a remarkable technological achievement. The enormous task that several teams of research workers have set themselves is to investigate the origin of the trace amines, to understand their metabolism, and to discover whether or not they possess an important biological role. The 2nd Trace Amines Symposium at Weitenburg Castle near Tubingen from the 15th to the 19th May 1985 was held to gain a somewhat clearer insight into the present state of knowledge. Since the first meeting in 1983 our knowledge has increased and interest is deepening. Hence the idea proposed at that first meeting, of organizing similar gather­ ings at regular intervals, has come to fruition. Covered in the Neuropsychopharmacology section of this book are studiesof the effects of certain trace amines on different forms of be­ havior, on neurotransmission mediated by . the classical neuro­ transmitters, on their biosynthesis or on catabolism, on their possible occurrence as a result of alternative metabolic pathways for the amino acids, and in some instances their neuroanatomical distributions.