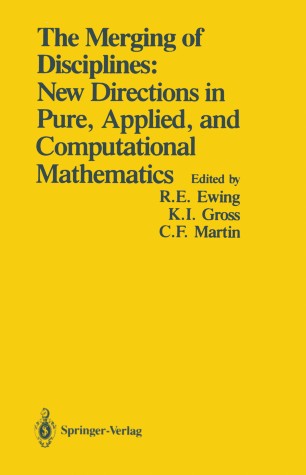 The Merging of Disciplines: New Directions in Pure, Applied, and Computational Mathematics

Proceedings of a Symposium Held in Honor of Gail S. Young at the University of Wyoming, August 8–10, 1985. Sponsored by the Sloan Foundation, the National Science Foundation, and Air Force Office of Scientific Research

This volume is the Proceedings of the symposium held at the University of Wyoming in August, 1985, to honor Gail Young on his seventieth birthday (which actually took place on October 3, 1985) and on the occasion of his retirement. Nothing can seem more natural to a mathematician in this country than to honor Gail Young. Gail embodies all the qualities that a mathematician should possess. He is an active and effective research mathematician, having written over sixty pa­ pers in topology, n-dimensional analysis, complex variables, and "miscellanea." He is an outstanding expositor, as his fine book Topology, written with J. G. Hocking (Addison Wesley, 1961), amply demonstrates. He has a superlative record in public office of outstanding, unstinting service to the mathematical community and to the cause of education. But what makes Gail unique and special is that throughout all aspects of his distinguished career, he has emphasized human values in everything he has done. In touching the lives of so many of us, he has advanced the entire profession. Deservedly, he has innumerable friends in the mathematical community, the academic community, and beyond.