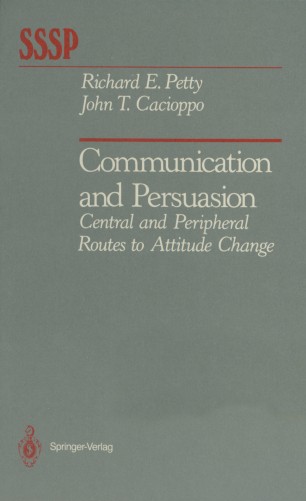 It has been over 10 years since we initiated work on our first series of collaborative experiments. As graduate students, we had great fun planning, conducting, and writing this research (Petty & Cacioppo, 1977). We enjoyed arguing with each other at our initial meeting in 1973 and have sub­ sequently become best friends, but neither of us suspected at the time that we would or could actively maintain a research collaboration over the next decade, or that we would now find ourselves in a position to write this monograph. As we note in Chapter 1, we began our studies of persuasion at a time when social psychology was in "crisis," and interest in research on attitude change in particular was declining. As we write this, we are aware of six new volumes on persuasion that are in press or in preparation and that should appear over the next few years. In retrospect, it is not so surprising that research on attitudes and persuasion would reemerge as a central concern of social psychology. We believe that human feelings, beliefs, and behaviors, whether in the domain of interpersonal relations (e. g. , marriage, aggression), politics (e. g. , voting, revolution), health (e. g. , following a medical regimen), or economics (e. g. , consumer purchases) are greatly influenced by the evaluations people have of other people, objects, and issues. Furthermore, evaluations (attitudes) are influenced by affect, cognition, and behavior.