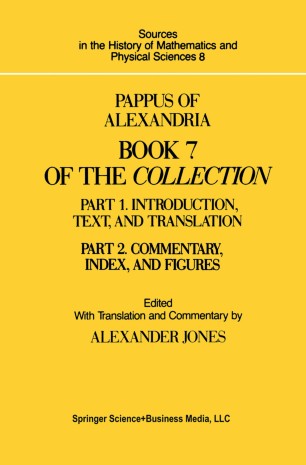 Pappus of Alexandria Book 7 of the Collection

Part of the Sources in the History of Mathematics and Physical Sciences book series (SOURCES, volume 8)

The seventh book of Pappus's Collection, his commentary on the Domain (or Treasury) of Analysis, figures prominently in the history of both ancient and modern mathematics: as our chief source of information concerning several lost works of the Greek geometers Euclid and Apollonius, and as a book that inspired later mathematicians, among them Viete, Newton, and Chasles, to original discoveries in their pursuit of the lost science of antiquity. This presentation of it is concerned solely with recovering what can be learned from Pappus about Greek mathematics. The main part of it comprises a new edition of Book 7; a literal translation; and a commentary on textual, historical, and mathematical aspects of the book. It proved to be convenient to divide the commentary into two parts, the notes to the text and translation, and essays about the lost works that Pappus discusses. The first function of an edition of this kind is, not to expose new discoveries, but to present a reliable text and organize the accumulated knowledge about it for the reader's convenience. Nevertheless there are novelties here. The text is based on a fresh transcription of Vat. gr. 218, the archetype of all extant manuscripts, and in it I have adopted numerous readings, on manuscript authority or by emendation, that differ from those of the old edition of Hultsch. Moreover, many difficult parts of the work have received little or no commentary hitherto.