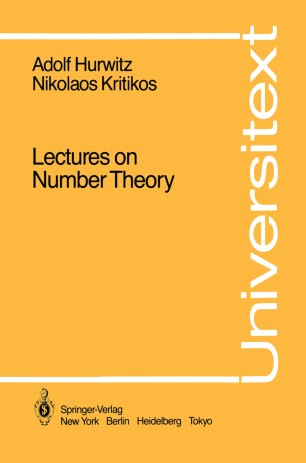 During the academic year 1916-1917 I had the good fortune to be a student of the great mathematician and distinguished teacher Adolf Hurwitz, and to attend his lectures on the Theory of Functions at the Polytechnic Institute of Zurich. After his death in 1919 there fell into my hands a set of notes on the Theory of numbers, which he had delivered at the Polytechnic Institute. This set of notes I revised and gave to Mrs. Ferentinou-Nicolacopoulou with a request that she read it and make relevant observations. This she did willingly and effectively. I now take advantage of these few lines to express to her my warmest thanks. Athens, November 1984 N. Kritikos About the Authors ADOLF HURWITZ was born in 1859 at Hildesheim, Germany, where he attended the Gymnasium. He studied Mathematics at the Munich Technical University and at the University of Berlin, where he took courses from Kummer, Weierstrass and Kronecker. Taking his Ph. D. under Felix Klein in Leipzig in 1880 with a thes i s on modul ar funct ions, he became Pri vatdozent at Gcitt i ngen in 1882 and became an extraordinary Professor at the University of Konigsberg, where he became acquainted with D. Hilbert and H. Minkowski, who remained lifelong friends. He was at Konigsberg until 1892 when he accepted Frobenius' chair at the Polytechnic Institute in Z~rich (E. T. H. ) where he remained the rest of his 1 i fe.