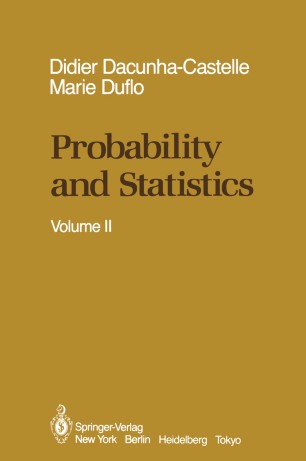 How can we predict the future without asking an astrologer? When a phenomenon is not evolving, experiments can be repeated and observations therefore accumulated; this is what we have done in Volume I. However history does not repeat itself. Prediction of the future can only be based on the evolution observed in the past. Yet certain phenomena are stable enough so that observation in a sufficient interval of time gives usable information on the future or the mechanism of evolution. Technically, the keys to asymptotic statistics are the following: laws of large numbers, central limit theorems, and likelihood calculations. We have sought the shortest route to these theorems by neglecting to present the most general models. The future statistician will use the foundations of the statistics of processes and should satisfy himself about the unity of the methods employed. At the same time, we have adhered as closely as possible to present day ideas of the theory of processes. For those who wish to follow the study of probabilities to postgraduate level, it is not a waste of time to begin with the least difficult technical situations. This book for final year mathematics courses is not the end of the matter. It acts as a springboard either for dealing concretely with the problems of the statistics of processes, or viii In trod uction to study in depth the more subtle aspects of probabilities.