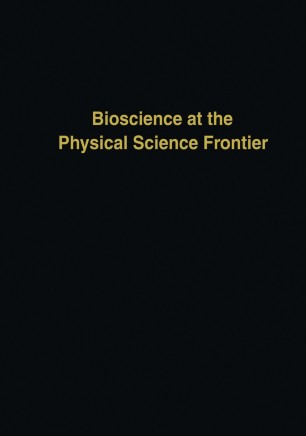 Bioscience at the Physical Science Frontier

Since early Greek and Roman times, atoms were assumed-after un­ dergoing their various interactions-to take on the stable configurations of either the living or the inanimate world. This simple and unitary theory has evolved markedly, even while maintaining its validity over several centuries of vicissitudes, and in essence constitutes the first ex­ ample of a synthesis between the physical and the life sciences. In modern times, a similar relationship between the structure of various macromolecules and the function of living cells has also emerged as one of the most striking findings of those scientists active at the con­ vergence of the physical and life sciences. This fundamental result is re­ ported in the first two sections of the present work, namely those on "Oncogenes and Cancer" and "Lower-to-Higher-Order DNA Struc­ ture," in many cases by those recent Nobelists who themselves have been major contributors to work at the intersection of these fields. Many other significant areas of forefront scientific inquiry today (for example, research on the brain and vision), as well as some of the most exciting technological developments (e.g., work on renewable fuels and materials, biotechnology, and NMR and X-ray tomography) and method­ ological advances (e.g., studies in the fields of statistical mechanics and cancer chemotherapy) depend on the complex but harmonious collabora­ tions of physicists, chemists, mathematicians, engineers, biologists, and physicians.