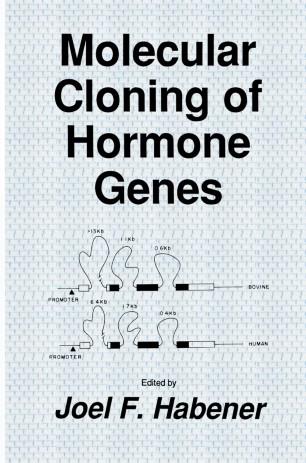 Part of the Molecular Biology and Biophysics book series (MBB)

The peptide hormones are small proteins that regulate cellular metabolism through their specific interactions with tissues of the endocrine, nervous, and immune systems, as well as in embry­ onic development. During the past ten years, refinements in the techniques of recombinant DNA technology have resulted in the cloning of genes encoding approximately 50 different hormonal and regulatory peptides, including those in which the peptides themselves and the mRNAs encoding the peptides are present in only trace amounts in the tissues of origin. In addition to provid­ ing the coding sequences of recognized hormonal and regulatory peptides, gene sequencing has uncovered new bioactive peptides encoded in the precursor pro hormones that are then liberated along with the hormonal peptides during cellular cleavages of the precursors. The encoding of multiple peptides in a single mono­ cistronic mRNA appears to be a genetic mechanism for the gener­ ation of biologic diversification without requiring amplification of gene sequences. Two of the objectives in the assembly of this book are to pre­ sent, in one volume, the known primary structures of the genes encoding several of the polypeptide hormones and related regulatory peptides, and to provide an account of the various ap­ proaches that have been used to identify and select the cloned genes encoding these polypeptides. The contents of the two in­ troductory chapters are intended to provide the reader with a brief background of the approaches to gene cloning and the struc­ ture and expression of hormone-encoding genes.