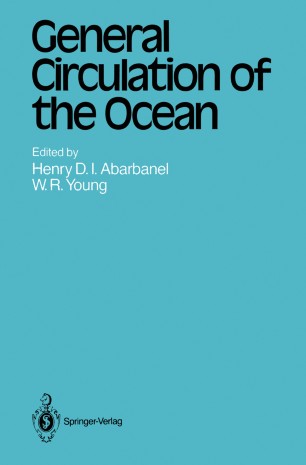 General Circulation of the Ocean

The ocean has entranced mankind for as long as we have gazed upon it, traversed it, dived into it, and studied it. It remains ever changing and seemingly never changing. Each wave that progresses through the. imme­ diate surf zone on every coast is strikingly different, yet the waves come again and again, as if never to end. The seasons come with essential reg­ ularity, and· yet each is individual-whatever did happen to that year of the normal rainfall or tidal behavior? This fascination with the currents of the ocean has always had a most immediate practical aspect: shipping, transportation, commerce, and war have depended upon our knowledge, when we had it, and floundered on our surprising ignorance more often than we wish to reflect. These important practical issues have commanded attention from commercial, academic, and military research scientists and engineers from the earliest era of organized scientific investigation. The matter of direct and insistent investigation was from the outset the behavior of ocean currents with long time scales; namely, those varying on annual or at least seasonal cycles. Planning for all the named enterprises depended, as they still do, of course, on the ability to predict with some certainty this class of phenomena. That ability, as with most physical sci­ ence, is predicated on a firm basis of observational fact to establish what, amorig the myriad of mathematical possibilities, is chosen by Nature as her expression of fact.