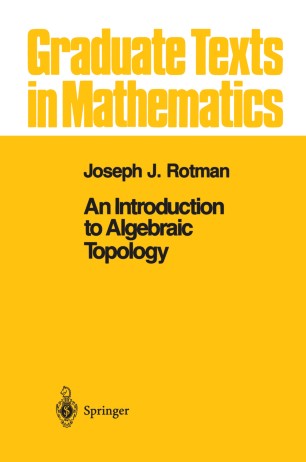 An Introduction to Algebraic Topology

There is a canard that every textbook of algebraic topology either ends with the definition of the Klein bottle or is a personal communication to J. H. C. Whitehead. Of course, this is false, as a glance at the books of Hilton and Wylie, Maunder, Munkres, and Schubert reveals. Still, the canard does reflect some truth. Too often one finds too much generality and too little attention to details. There are two types of obstacle for the student learning algebraic topology. The first is the formidable array of new techniques (e. g. , most students know very little homological algebra); the second obstacle is that the basic defini­ tions have been so abstracted that their geometric or analytic origins have been obscured. I have tried to overcome these barriers. In the first instance, new definitions are introduced only when needed (e. g. , homology with coeffi­ cients and cohomology are deferred until after the Eilenberg-Steenrod axioms have been verified for the three homology theories we treat-singular, sim­ plicial, and cellular). Moreover, many exercises are given to help the reader assimilate material. In the second instance, important definitions are often accompanied by an informal discussion describing their origins (e. g. , winding numbers are discussed before computing 1tl (Sl), Green's theorem occurs before defining homology, and differential forms appear before introducing cohomology). We assume that the reader has had a first course in point-set topology, but we do discuss quotient spaces, path connectedness, and function spaces.