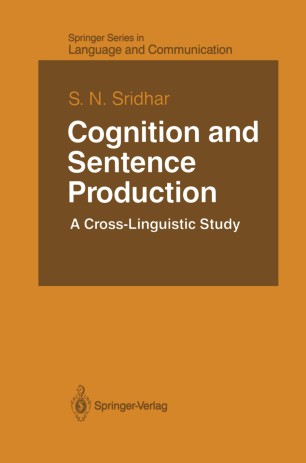 Part of the Springer Series in Language and Communication book series (SSLAN, volume 22)

The developments in linguistic theory over the last three decades have given us a better understanding of the formal properties of language. However, as the truism goes, language does not exist in a vacuum. It in­ teracts with a cognitive system that involves much more than language and functions as the primary instrument of human communication. A theory of language must, therefore, be based on an integration of its for­ mal properties with its cognitive and communicative dimensions. The present work is offered as the modest contribution to this research paradigm. This book is a revised and slightly enlarged version of my doctoral thesis submitted to the University of Illinois at Urbana-Champaign. In writing the original version, I had the privilege of working with Professor Charles E. Osgood, who is widely recognized as the founder and one of the leading figures of modern psycholinguistics. I have benefited from ex­ tensive and stimulating discussions with him, not only on this topic but in the development of his theory of language performance in general (see his Lectures on Language Performance, 1980, in this series). However, the re­ sponsibility for the particular formulations of the theory, hypotheses, in­ terpretations, and conclusions found in this work-which have been in­ fluenced, no doubt, by my training as a linguist, rather than as a psychologist-are my own.