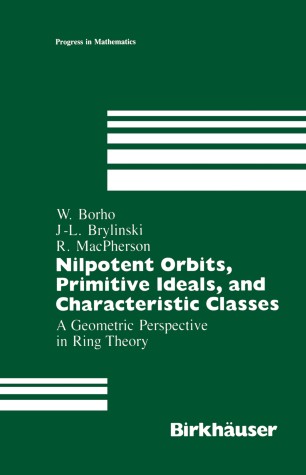 A Geometric Perspective in Ring Theory

Part of the Progress in Mathematics book series (PM, volume 78)

1. The Subject Matter. Consider a complex semisimple Lie group G with Lie algebra g and Weyl group W. In this book, we present a geometric perspective on the following circle of ideas: polynomials The "vertices" of this graph are some of the most important objects in representation theory. Each has a theory in its own right, and each has had its own independent historical development. - A nilpotent orbit is an orbit of the adjoint action of G on g which contains the zero element of g in its closure. (For the special linear group 2 G = SL(n,C), whose Lie algebra 9 is all n x n matrices with trace zero, an adjoint orbit consists of all matrices with a given Jordan canonical form; such an orbit is nilpotent if the Jordan form has only zeros on the diagonal. In this case, the nilpotent orbits are classified by partitions of n, given by the sizes of the Jordan blocks.) The closures of the nilpotent orbits are singular in general, and understanding their singularities is an important problem. - The classification of irreducible Weyl group representations is quite old.